There Are Two of Us

Our LP finally arrived, and we gotta say, it's a real beauty: 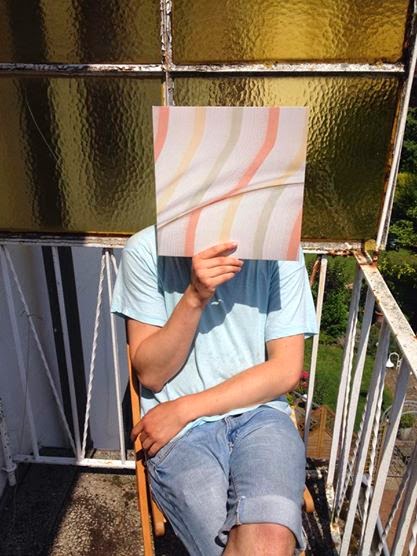 You can order it on vinyl, here:
sicliferecords.bigcartel.com

And if you just wanna give it a listen (and maybe buy the MP3s):
andaluciaandalucia.bandcamp.com

Because we were kinda bored waiting for it to arrive and we have a great friend with a camera we made another video for the song "The Shrill":

Oh no, it isn't:
We're going on tour in August in Germany, Austria and the Netherlands. Swing by, if you have nothing to do.

Video never killed any star at all.

you can listen to "Anonymous God" from our new album There Are Two of Us now. And because this is the 21st century and just listening to stuff is a drag you can watch some nice shapes and colours as well.

Manu and Thalea, two fine artists of DAMAGE GOODS made this video for us and the only thing we can say about it is that we like it quite a lot:

"There Are Two of Us"

we have recorded an album. It's called "There Are Two of Us" and it's got eight tracks on it:

It will be released on vinyl via Sic Life Records and this is how it's gonna look like: 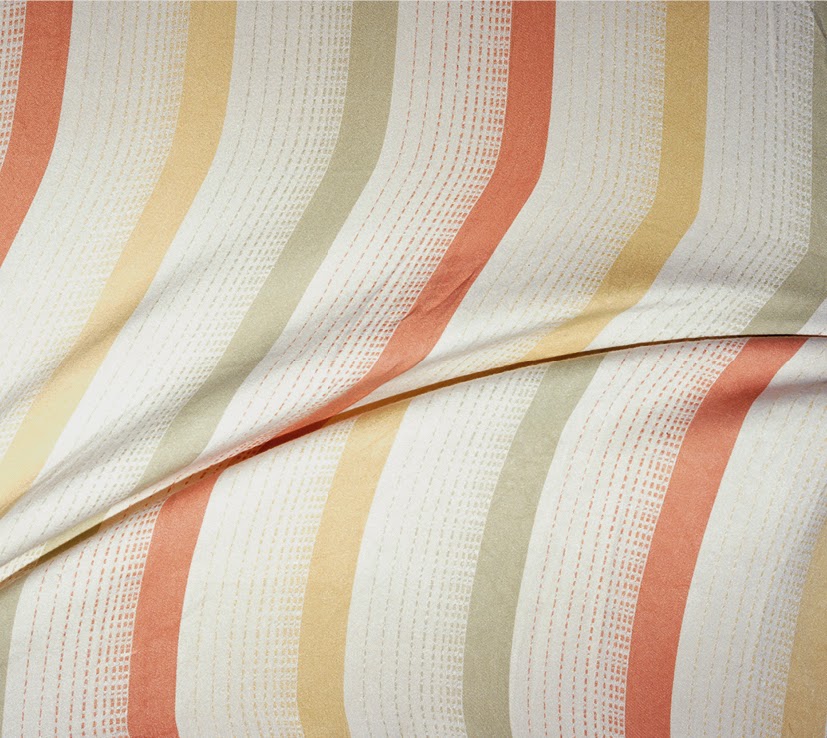 Release is due 18/07/2014 and you can already preorder it here.
For the moment this only works for German orders, but we're working on a solution for everybody else.
In the meantime (or if you don't wanna pay via Paypal) you can just drop us a line at itsasicliferecords@gmail.com as well, we will work something out.

In other news, we are planning a tour for August (06/08-17/08), if you want us to play somewhere, get in contact: philipp.ohnesorge@gmail.com.

Thanks, bye.
No comments:

Margo appearing on "PiN the Mix #7"

Hey,
Pogo McCartney is not only playing bass for Messer, he's also well known for his exquisite taste in all kinds of musical matters. Thats why he curated a fine little mix(tape?) for the website Pretty in Noise. Alongside song by such great artists like Brian Eno, Mäuse or Chain and the Gang you can find "Margo", a song we wrote quite a while ago and recorded for our LP, which will be release whenever. Exclusively! We're honoured, Pogo!

there's absolutely nothing new. But the last time we posted something was over half a year ago, so here's a write-up, just for the sake of it.

Last year was fine. We learned a lot, met a few cool gals and dudes and we think, we're better now, than we were twelve months ago, so that's not too bad... Ah! We met Blake Schwarzenbach and gave him one of the like eight (?) shirts we made, the last one, to be accurate. He's probably wearing it right now, working in his backyard or doing his laundry, at least we'd like to think so. Nah, he most likely just threw it away five minutes after we gave it to him.

Kinda took the wrong turn there, here's the important part:
WE RECORDED AN ALBUM!
At Rama Tonstudio, with the wonderful Christian Bethge, who is a dear friend of ours now. Currently working on the mixes, but we're most def. gonna put it out this year. Time will tell.
Ah yeah: Next Shows
02/21/2014 with Lost Girls in Marburg @ Café Trauma
02/22/2014 with Lost Girls and Die Nerven in Wiesbaden @ Schlachthof

Swing around, say hi and watch us making a fool of ourselves.

P.S. Here's a funny pic of Philipp, strolling along the beautiful roads of Andalucía to round things up: 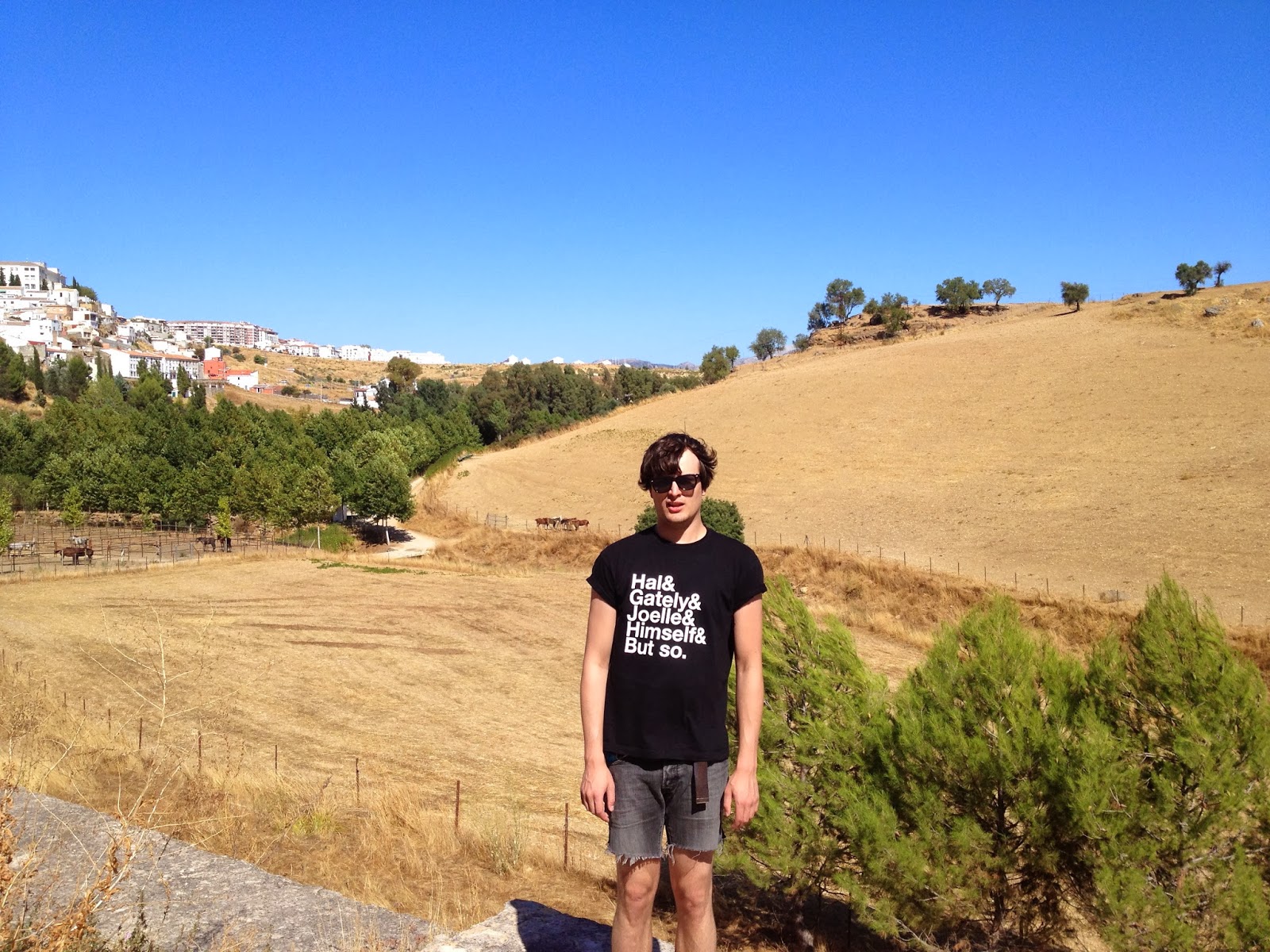 Hey guys, I just came to look at this blog again and found the last post to be kind of long ago, so here's a little update:

Last weekend we played at our favourite place to be, AKZ Recklinghausen. They had a little party for their 10th birthday. We didn't fuck up our set, which is good I guess and afterwards we danced our little feet off with all of our friends, definitely fun times!

Now we're taking a little break, I'm writing my bachelor thesis and André is preparing for his final exams. Meanwhile the songs we recorded earlier this year are being mastered, two of which we gotta put on a sweet little 7" Split with our friends from Port Rois. Hoping it's gonna hit the pressing plant pretty soon.

Hitting the road in August again, check the "Live" section or facebook for more information, here's the flyer for the show in Frankfurt: 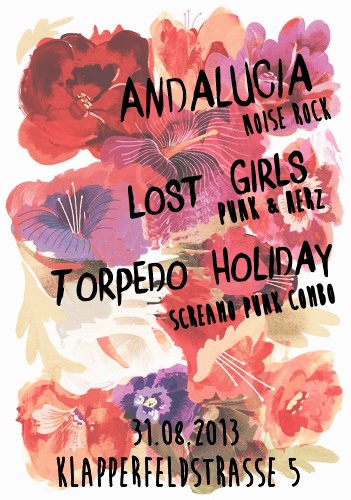 We're looking for help for the 30th of August: We want to play somewhere in west/south germany with the beautiful Dulacs. You know something? Get in contact.

The last two bits real quick, because i get bored writing up this shit:
1. Playing with Blake Schwarzenbach in Münster on the 7th of September... wtf?!
2. We got a shirt now. Check it out!

While our recordings are still work in progress, we have some new shows coming up:

Maybe we can even find some other people who wanna let us play along the road on those weekends. Get in contact.

By the way, there is a beautiful flyer for the Cologne show: 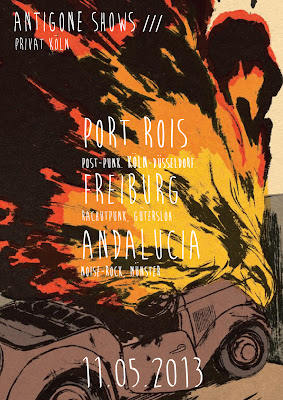